I just come back from 10 days in the west (Alberta and BC). I really enjoyed Banff and Jasper because of their incredible sceneries. But the most incredible scenery will probably be getting close to Jason Del Vicario and his family.

Because Vicario invited me to sleep at his cabin located on an island, close to Vancouver. We went to Costco together, we went to some Liquor Store, we took his boat to go to his cabin, we drank beer, we smoked a bit, we swam in the cold water of the Pacific Ocean in front of his cabin, we ate salmon and shrimps together (both caught by him) and we fished for almost 12 hours the next day. Holy fucking shit, what an adventure it was.

I hear you asking: "What does Vicario put in his basket at Costco?". Yeah, great question my friends. Nothing better than a picture to answer that question: 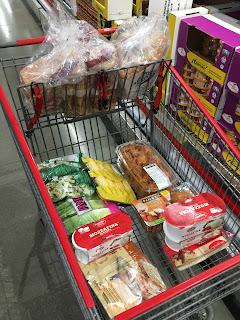 Vicario is kind of a hippie. He lives in a cabin that is almost autonomous with solar panels and barrels to receive the rain. That guy is surely not the kind that buys a Ferrari and snorts coke. He's much more the kind of guy that lives in nature and that washes in the Pacific instead of in a shower. I wouldn’t be surprised if  he’d piss and shit there too.

It takes a lot of trust to invite someone you've only seen for a couple of hours in a bar in Quebec city to your cabin located more than 3000 kilometers away.

In contrast, I'm someone who doesn't really like people in general, and I don't usually trust people on the Internet. I usually think that some shit will happen to me if I trust them. But Vicario invited me at the place where he shits every day, among his wife and four boys. He's been very generous and simple and didn't try at all to impress me. Oh shit no. There was food dropped on the floor by his kids at many places, it was really "what you see is what you get". How can you not trust someone like that?

I'm not saying to have a blind trust on Vicario, such as a blind trust on me or anyone else. But he's cool and simple and so many people are fucking assholes or search exposure for the wrong reasons (they couldn't play the guitar and become a rock star, so they try to become star investors). Vicario is not like that... well, I don't think he's like that from what I've seen.

So, him and Be Smart Rich are, to me, the two only guys related to investment in Canada that get my Penetrator love stamp.