Investors from Quebec know Bernard Mooney while those from other provinces probably don't know him. Short story, he's retired now, but he used to write articles in "Les affaires", which is probably the most known website about investment in Quebec. He's also a friend of François Rochon, the CEO of Giverny Capital, one of the best investment firms in Quebec (which you should follow via www.whalewisdom.com if it's not already the case).

I bought the book "Investir à la bourse et s'enrichir" ("Investing on the stock market and getting richer", for you, fucking unilingual assholes from the rest of Canada) as a Christmas gift for my 19 years old nephew which is in a period of his life where he seems to be clueless about his future. He's been saying for years that he wants to work for Google in California, but mostly for the glamour of it. He's got poor grades and is unable to succeed a philosophy class which he failed 3 times in a row or something like that. Also, he  mostly smokes pot and play video games. But he wants to become rich and drive a tesla. Just like thinking about being rich was enough to become rich. That's why I bought him this book. I don't know if he ever read an entire book just for fun, outside of school, but I thought it was a good idea anyway. 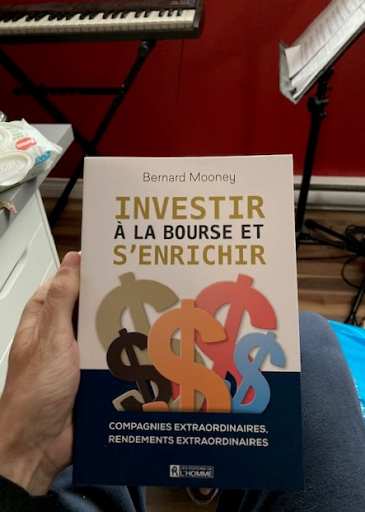 This is the book in my environment of work everyday. Let's admire my jogging pants.

Anyway, in this new edition of the book (first written in 2001 but the new edition was made in 2020), there's no big changes. I think that the only new thing is a comment from Mooney saying that he thinks that the initial version of his book telling that looking for stocks that grow 20% every year is too ambitious. Even 15% is too ambitious. He says that he thinks that 10-12% is the right growth to look for, but it's partly because he's retired now and wants to preserve his capital. However, he says that companies that grow too much are riskier in the long term that those who grow by 10-12%.

I don't disagree with him (he's 62 years old now) but I think that a younger investor should be a little more aggressive. In my opinion, with 10-12% per year, you will get something good, but not exceptional. The key is to mix some high growth companies with medium growth companies. And to exclude any company with an annual growth under 10% (realized and expected).  The PE should be considered only on the angle that a very expensive PE (let's say over 50) should be avoided except on very rare occasions. Other than that, with a PE of 15, you'll usually get an average company because it's the average PE of the market. If you're willing to pay a PE of 30, just make sure that this company is twice better than the average company (and that the PE has always been expensive and the results have always been growing in a solid and steady way). If it's the case, paying 30 times earnings may be the right price to pay.