Back to the pre-investing sheet

Bad experiences like that Valeant shit are very instructive... once your anger is over. Traumas may have a good effect. For me, the good effect is that I woke up.

I woke up from that fucking wonderland where I thought I could buy a stock without any analysis, reproducing moves of so-called experts. And Bill Ackman is no longer a kind of Jesus-Christ for me. For instance, I sold my Canadian Pacific shares because I realized that even if many people worship Hunter Harrisson (including me) Canadian National and Union Pacific are better railroad operators. They're more expensive, but on every aspect (except share repurchase), they're superior to CP.

The method exposed in the next lines is probably more intelligent and more effective than many superinvestor's moves. Many of these guys manage billion of fucking dollars and they act like cunts. Fuck them.

I've found an old pre-investing sheet I created about 4 years ago (thanks to Bernard Mooney, once again) and I've decided to update it. At the time, in 2012, that sheet attributed a score to different stocks by looking at different metrics. In retrospect, I see that some metrics used at the time didn't have importance (variation of the long term debt over last 3 years, analysts recommandations...). Too, I didn't have a "momentum indicator", so I didn't really took consideration of a trend in earnings. However, I could see what were the best companies in a perspective of consolidated statement of financial position, which is probably the most important thing to do before investing.

So, I updated that sheet and I took a look at about 60 good/great companies from Canada and USA. All the metrics that were important in my view were gathered on a single line (performance of the stock, EPS growth, actual and historic ROE, dilution of the shares, cash VS debt, debts VS earnings, payout ratio, forward PE, actual PE VS mean PE over the last 5 years and Beta. I added the "momentum indicator" which is related to EPS growth over the last year.

The most important thing for me is to select companies that got a good result on that sheet first. If a company has good growth, small debt, a lot of cash, doesn't issue stock, has a low payout ratio, a low beta and a PE which is equivalent or smaller than it's average PE over the last 5 years, it's probably a good buy.

The idea is to combine a good score with the momentum indicator. Take a look at that sheet, it's a fucking great gift I'm giving to the readers here, I believe.

Funny story: 4 years ago, I took a look at Valeant, using my first version of that sheet and I said to myself, "that fucking stock looks pretty bad on paper!"

4 years later, I had almost 15% of my portfolio on that stock. 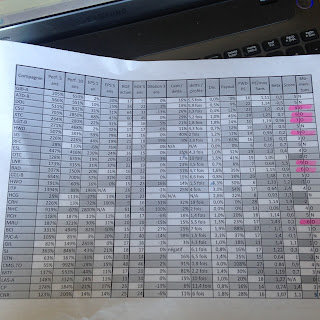