Everybody will say that market timing isn't something to seek for an intelligent investor. Because we simply never know what the future will be.

But let's be realist, the coronavirus won't disappear overnight.

I've read that the reduction of measures (isolation, closing of schools, restaurants, parks, libraries, shops, etc) won't happen before the last new case and an additionnal 4 or 8 weeks of security period. Does anybody thinks that the last new case will soon be discovered (in may for instance)?

Let's be very very positive and let's assume that the last new case will be discovered on may 31th (2 months from now). We'll have to wait probably 2 more months (until the end of july) to see some measures be reduced slightly. And probably a few more months to see the measures be completely cancelled (october?).

Every expert says that we won't get a vaccine before at least one year. Perhaps 9 months if we're very very lucky. Until then, the scientists will perhaps find a drug that will reduce the effects of coronavirus. That's our only hope in regard of the economy. The borders will be shut until then. People won't use their car, won't go to shops. They'll only stay at home, eat and watch Netflix.

So, it's surely not urgent to buy shares on the market. Let's wait for a big panic headline about the USA. Something like 5000 deaths on one day in the states. Or the news that Trump got coronavirus. I'm pretty sure that something close to the end of the world, or at least, the end of capitalism will be in the mind of masses, sooner or later.

Meanwhile, many of us will lose our jobs. Many will fall into depression. Many will experience paranoia because that virus make us feel that every people we cross is a threat. That's a very strange time. Probably the strangest time ever on earth.
Publié par Penetrator à 07:27 5 commentaires:

Recent crisis and how long it took to come back

What's tragic about the current crisis is that many people will lose their job. A lot of people working in tourism (airlines, hotels, attraction parks, and many other activities), restaurants and retail will be unemployed for at least a few months. It's certain that a recession will occur. That means less money in the economy and a much higher unemployment rate.

You know the famous quote about the difference between a recession and a depression? A recession is when your neighbour loses his job. A depression occurs when you lose your job. That's the only funny joke I know about economics.

So, in a way, we're going through a tragedy. I have the chance to work in a field related to the public sector, so, the crisis won't affect my job. But it's not the case of many people.

Let's compare apples with oranges. In other words, let's compare the lenght of some recent big market drops that happened for reasons that aren't related:

This time, the experts say that a vaccine could be available in 12 to 18 months. That means that the crisis would probably last a few more months before the economy comes back.

Meanwhile, brick and mortar shops will suffer, it's obvious. There's probably only food shops that will do okay because that's the only place where people will be allowed to go without restrictions. A lot of people will become obese, having nothing else to do than eating.

I think that techno stocks are the best one the face the crisis. Google, Facebook, Netflix, Amazon. I think that payment stocks like Mastercard, Visa and Paypal will also do well even if the economy goes into a contraction phase. People are encouraged to pay with cards instead of money in many places and I believe that this event will accelerate the disparation of real money (not really the disparition, but at least a big drop). I'd also bet on Metro and CN. Well, CN will be affected but their position seems very solid. Many companies will have a hard time, but when you have a monopoly or an oligopoly, you're always in a much better place than all the others.

Once again, oil stocks are a pretty bad place to put your money. Retail was half-interesting, half-bad, but now, it's almost all bad.

Eventually, we'll be back on track. It may be tough until then, but meanwhile, while the battlefield is all fucked up, it's a good time to take a strategic position for the future. That's how I'm approaching the issue.

The current crisis with a little perspective

Today, Emmanuel Macron and Quebec leaders said that it was just the beginning of COVID-19 crisis. So, it looks like we're gonna have a taste of apocalypse.

Is it just the start of the massacre? Nobody knows, just like it's always been the case. That's the beauty of life. We never know anything about the future. We don't even know if there's a future.

Once again, there's nothing like taking a look at some historical datas. So, let's take a look at the S&P500 chart since january 1928: 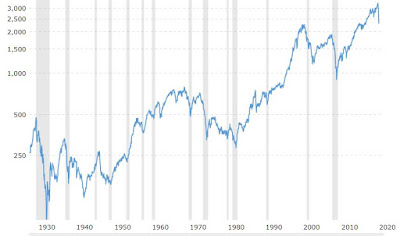 There's been some tough times, but someone who put money on the stock market in 1928 had made about 100 times his money this month, even after the big drop we've just experienced. That's not bad.

And here's the worst market drops since 1928:

Over the last 92 years, the stock market had a -10% performance or worse, 21 times. A few years have been negative, but better than -10%. So, let's keep in mind that the performance of the market  has been negative about 25% of the time. For all the jovalists out here, it means that you have 75% of chances of making money with the market, if you invest on a random year.

The year 2020 is the  fifth worst year of the last 92 years so far. So, we've reached a bad performance that's been rarely seen. It doesn't indicate that today is the best time to buy shares, but it surely indicates that it's a special moment. Let me remember you that we can currently buy a lot of stocks for less than 50% their average PE ratio.

To me, it's clear that it's at least an OK moment to buy shares. It may be a pretty tough beginning of decade. Perhapes that we'll be in a deep shit until 2023. But I'm pretty sure that by 2030, the stock market will offer us a nice reward if we're astute enough to adjust our portfolio to this reality.
Publié par Penetrator à 16:51 3 commentaires:

Everybody was laughing about coronavirus about 2 weeks ago. Me included.

Of course, current and forward PE ratios may be completely wrong. With all the stores that close, the earnings of many companies will look like apocalypse next quarter (in Quebec, schools are closed for at least 2 weeks, every bar and pub is closed, pools, libraries, arenas...) I now believe that this crisis will last for many months (Alberta just closed it's schools until september, which surely means that the situation is critical).

However, most of us will survive. So, for those who will survive long enough to follow the stock market in the coming years, here's some crazy bargains that you could purchase on march 16th, 2020. Let's take another look at that list in 1 or 2 years:

Some of these names will be impacted a lot by the coronavirus crisis (MTY, Disney, Booking Holdings). However, some others like Facebook, Google and Berkshire Hathaway may not be as much impacted by it. And these last 3 stocks have a lot of money and have a gigantic moat. So, they may be a great place to put your money. Because a lot of companies will be affected by the crisis.

Many will suffer a lot. Some other will simply disappear.

I'm writing this piece of art close to midnight.

Yes. It's close to midnight and something evil's lurking in the dark...

That something evil is of course Coronavirus. The biggest threat to humanity since the meteorite that hit the earth 65 million years ago and killed all the dinosaurs.

That new threat makes people crazy. For instance, everybody is now completely mad when they see a toilet paper roll. People can kill for that. Yes my friends. These people probably expect that they'll have to hide in their basement for months and don't want to have to wipe their asses with their clothes or against the corner of a wall.

And after all that, some of you will still believe that we have an immortal soul because we are special.

So, what about the Penetrator Portfolio, since that post is supposed to bring something about it?

The Penetrator portfolio is down 9%. Isn't it great to have such a negative performance?

A few statistics about the Penetrator portfolio:

Note: the forward PE and the estimated growth are pre-crisis. Probably that this huge madness will have a significant impact on earnings and the actual growth will drop. This would mean that the current PE ratio of my portfolio would be lower than the reality (instead of a PE of 20,5, it could be something like 23-24). Well, I don't know, so I'm keeping the latest numbers available.

One thing is sure for me, many stocks are cheap. For instance, Ulta Beauty is currently sold for 14 times the earnings. OK, the growth may not be what it used to be, but fuck, that's still a good  company with very predictable cash flows.

A low beta portfolio is very useful in times like these. A little less useful on a bull market though.

Today, we learned that this coronavirus madness is now a pandemy.

Then, tonight, we learn that Tom Hanks and his wife both caught coronavirus.

Then, Donald Trump stopped every flight from Europe going to USA for the next 30 days.

And that’s why, for the first time of my life, I’m gonna open a margin account shortly.

But perhaps I’ll wait a bit more. Imagine if there’s two or three more big stars like Leonardo Di Caprio or Beyonce that get coronavirus... we’ll probably be able to buy Amazon at a PE of 15!

That will probably happen. These fucking stars are always in airports and everybody wants to see and touch them.
Publié par Penetrator à 19:40 4 commentaires:

That’s how i woke up today, seeing that many stocks were down 10%. It was an ocean of red with a few green spots here and there (O’Reilly being one of the few).

Swing the bat now. You may get an homerun later but you’ll surely do well if you swing it today. I don’t think I’ll be wrong on that one maybe one year from now.

Anyway, you’ll be dead sooner or later. Meanwhile, you must try things. Buying stocks these days could be a great experience in your relatively short time being alive.