Behind the doors, she shows me a VHS cassette which I'll never forget.

Almost 25 years later, I still remember how I felt at the second she showed me the cover. I started to laugh and I still think it's probably the best cover in the entire history of cinema.

I didn't do anything with that name then. But it stayed in my mind and reemerged later…


Later, around 2002, there was an online game on the Internet which I liked a lot. It was called "Lycos Fightclub" (it doesn't exist anymore). We had to chose a character and fight a friend who chosed another character. We had also to chose a victory call. My character was frequently called "Penetrator" and my victory call was: "You've been penetrated".


Then, nothing happened for the next 10 years.

In 2012, I started a new blog and the first name that came to mind was "Penetrator".

I'm stuck with that name forever. Because, once you see the cover of the movie, you can't forget it.

That's the very deep story behind the name "Penetrator". 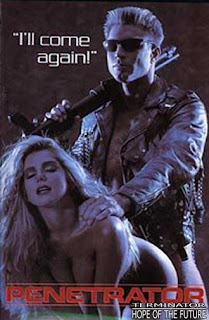