I've never been a big fan of Warren Buffett. The 86 years old fucker seems to have lived an empty life, always focussing on money and on nothing else (family, history, culture, etc). Surely a good guy, but not as stimulating and fascinating as Steve Jobs.

And I've always found that Berkshire Hathaway was a boring investment. How could an investor put money in that boring stock? The company is so huge that it's performance is more and more similar to the market.

Well, that's what I thought.

The chart below shows the performance of BRK VS the market over the last 5 years. The difference is even bigger if we look at a 10 years chart. As you can see, BRK beats the market easily. 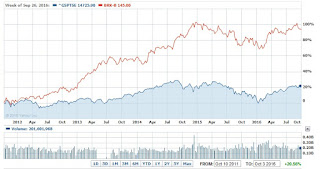 That's what I say. That's not what I do. But I'll probably move in that direction, sooner or later.

Finally, here's some BRK metrics according to Reuters: