You want to see something magic? 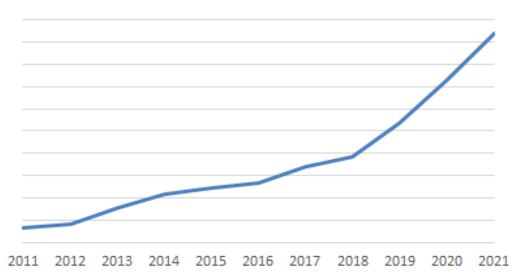 All around me, I know a few people who could have achieved something similar. But they're too lazy to learn about the stock market or they're interested by the stock market only for speculation. So they buy and sell stuff they know nothing about. I even know a guy who has bought a stock related to magic mushrooms.  That's the exact definition of speculation in my opinion.

Many people like Bernard Mooney (a great financial journalist who retired some years ago) and François Rochon have said it a few times: the best moment to invest on the stock market is now and if you chose great stocks and keep them for many years, you will have more and more money in your portfolio, year after year.

You can't really understand that after only 2 or 3 years on the stock market. But after 10 years or more, you have hindsight and you can see what went wrong and what went right.

I have a very good revenue. It helped me to get that chart. But if I hadn't make some stupid mistakes, that chart would be even more impressive. Most investors accept it: you'll do some shitty things but as time goes by, you should do less and less of these shitty things. So a big drop on a chart related to some personal mistakes should be less and less probable as time goes by.

If everybody could get such a chart for their personal finances, there would be less fighting among couples, less stress, less anxiety, less people disliking their job (because they would leave it), more comfort, more time for families... So, I hope that everybody aim at something like that. Because your wealth doesn't bring me sadness. At the opposite, your wealth would be a motivation for me to reach something similar.