That's what I thought because I'm a guy full of opinions about things that I don't know. But I was wrong because there are some truly beautiful places in Ontario.

In my recent trip, I went first to Owen Sound which is a nice little town that I used as a central place to sleep. The City park is beautiful: there's a little river where you can rent a canoe, there's also a mini golf and lots of attractions for kids. I've loved that park which was one of the most beautiful that I've visited.

I've also been to Bruce Peninsula. It's a beautiful place. It looks like some carribean scenery. But the water is too cold to swim. And there's lots of people. If you pay to go to the grotto (which you should), you'll be able to admire one of the most beautiful spots of the region (maybe the most beautiful spot?). However, you'll only be allowed to stay there for half a day so you have to be lucky to get a sunny day (I had the change to get a sunny day). It's an amazing place, but if you drive from Quebec for 8-10 hours, that makes a lot of road just to see that place for 3-4 hours.

That's why you have to find other places, like Sauble Beach, for instance, which is a cute beach close to Owen Sound where you'll be able to relax with you family. The water is quiet and there are lots of people, so there's some action there. However, contrary to Bruce Peninsula and the grotto, a lot of people in Sauble Beach isn't too bothering.

And the trip ended in Toronto, my favorite city. I stayed at a great hotel, just besides the ferry to the Toronto Islands. At my hotel, there was a tennis court on the roof. I had to walk only 10 minutes to get to the CN Tower. And I met Be Smart Rich who brought some korean pastries for my family and eventually bought me an ice cream at La Diperie, downtown Toronto.

So, it was a great trip and I've discovered a part of Ontario that was a mystery to me.

We don't have that many beautiful cities in Canada. The beautiful cities are mostly in Europe. However, we have great nature everywhere, even in ugly New Brunswick. I love our Canada for the calm and beauty of many places, from BC to Newfoundlad.

And I like the fact that we can drive for 3 hours on a road without seeing anybody. It makes more oxygen for ourselves. 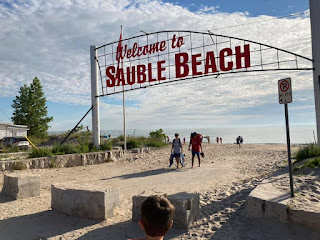 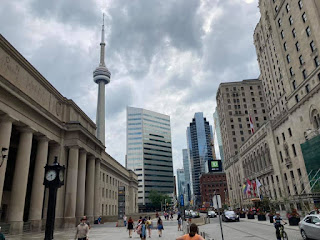 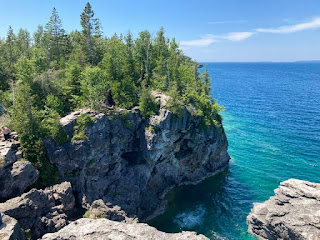 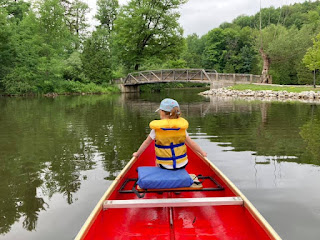