The impact of a catastrophe on the stock market

Today, it's been exactly 20 years since september 11th, 2001. I won't tell where I was or what I was eating because nobody cares.
However, I think that it's important to remember what happened to the stock market. Because, sooner or later, a similar event may happen. And the reaction of the market may also be similar. 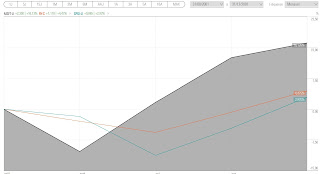 Here's a chart about what happened between august 31th and december 31th (2001).
On the chart, we can see the S&P and one of the biggest canadian companies (Royal Bank) and one of the biggest american companies (Microsoft).
First, the S&P was down about 10% right after the explosion of the towers. At the last day of the year, the market was up by about 26% (from september 11th to december 31th). The variation of Microsoft and Royal Bank is less impressive, which shows probably that blue chips are less affected by panics than small or medium caps. That's my personal hypothesis. I may be wrong.
Actually, we don't even have to think about 9/11 because COVID had much more impact on the market about one year and a half ago.
Fact is that so far, there's not a single catastrophe that had a negative impact on the market in the long term. Of course, catastrophes may have a huge impact on certain sectors of the economy, but when you have a diversified portfolio or you invest on the S&P500, you always recover and, most of the times, the recovery is quick.
Publié par Penetrator à 08:24